From the most recent MRI, they have found a 4mm ‘bleed’. It’s not doing anything but it goes some way to explaining the symptoms I’ve been having that can’t be blamed on steroids or Clive. A further MRI is being booked for the immediate future but that could be anytime.

I’m not sure whether it was the delay in taking them yesterday that caused it, but the tablet cocktail caught me off guard this morning;the first time I’ve had to throw up in years. It’s knocked me for six and is making me more woozy than normal, not to mention the slight nausea still knocking around.

As expected, the chemo tablets are knocking me around a bit, less predictable that it’s so soon into the course, but it was going to happen. How long for and what I feel will have to be seen though and strangely enough, there’s only me that will know what I’ll be capable of each day.

The MRI is booked for Sunday morning, as a ‘urgent’ scan, so at least there is scope for some sort of answer as to the pain; if it’s anything drastic, I’m sure something will be said, but chances are nothing will be and yet again I’ll be stuck wondering what to do next….

The steroids have been stepped up from one tablet a day to three in an attempt to control some of the co-ordination and woozines issues. Whether there are any results or improvements from it, I’m just going to have to see.

A mix of steroids, anti-sickness for chemo, general anti-sickness, anti-biotics for my chest, painkillers and chemo tablets are now filling most of the worktop; I’ve no idea what all of those combined will do to me as it’s unpredictable enough just on the chemo ones how I will be, so I could be in for a treat.

When I mentioned the head pain increasing so much, Dr. Spooner started arranging a MRI scan, which is a lot earlier than the next one should be and the next clinic appointment is in a fortnight, rather than a month, so some progress could be on the cards. I guess the scan will be done before then, otherwise it’s a bit pointless.

At least I’m a little closer to some sort of answer…I could know in a fortnight a lot more than I do now about the possibility of a future…for what it’s worth.

Nothing to report from the scan, as predicted…so fingers crossed on Tuesday they can give me some indication of what comes next. It will be the first real showing of how the treatments have affected Clive at all, as the last one was more of a base image to judge things by.

From the added head pains and pretty much every symptom getting worse over the past 6 weeks or so, I’m anticipating some growth and less than ‘positive’ news, but it’s what I need to hear..in every sense of the word, my head feels like it will explode. It can’t take much more of any of the crap that’s bouncing around it; whether it’s the tumour, the anger, the frustration, the sadness, the falseness of people, the lack of purpose or the loneliness, I want it to stop. I need it to stop.

I won’t see the results from Thursday’s scan until next week and it’s very much at the point I couldn’t have less of a care what the findings are from it. The external symptoms have got worse over the past 6 weeks or so and over that time I’ve given up on ‘fighting it’ as so many proclaim I’m doing; there is no fight, there never was, I have no descision to make with any of it. It shall run it’s own course.

The scan today was little more than a formality and the results will be unknown until 10th February…I’ve been pre-warned that it’s the next month’s scan that will hold any answers rather than this one, but it will still be good to see what’s going on in there.

The chemo tablets are over for now, I’m glad they’re nearly cleared through my system as they have made me the groggiest I’ve been so far in this pitiful story. It’s been at some tricky points but just crumbling into a heap on the floor has never felt such a wonderful option before this week.

My leg does seem to be heavier than it has been of recent weeks, so going up stairs and general moving has been a little more effort over the past few days. It’s more than likely the drop in steroids causing it, which is so gradual I wouldn’t have thought the changes would be as quick as they are, but it could just be a blip.

The scan has finally come through; next Saturday morning. It’s a bit of an annoyance that it’s after Monday’s appointment so there won’t be any discussion related to growth/shrinkage/nothingness. I can only assume they’ll have me back the following week to hit me with whatever news the 18th brings…

At least I know I’ll be coming home with a goody bag from the pharmacy, it’s normally a month long course of chemo tablets they stick me on, but with an increased dose, they could do anything really.

Fred is off this morning, yet he still answers the phone and sorts out what needs answering- the elongated MRI from October is in lieu of any kind of biopsy, which they couldn’t do for obvious reasons, and was indeed for them to see what they are facing. They won’t scan during the treatment, but will do so frequently, they say, afterwards….

It’s possibly just a coincidence, but after a mountain of chinese takeaway last night, sleep was marginly better, not proper, actual sleep, but a few hours extra and a degree of being slighty more awake. It’s probabably nothing and will be back to normal later, but for now, it’s a small victory. There’s little else to really acheive at the moment, waking up and still being able to move is pretty much the goal for each morning and so far, it happens.

It’s a hell of a good job I called to see whether a timetable could be arranged for the radiotheraphy course, which is stupidly early in the morning, so plenty of coffee and called in offers might be needed very soon, but it turns out I’m booked for an earlier time on Tuesday than planned, so the day shouldn’t seem quite as long.

Most of what was asked; the slight nausea, wobbliness and paranoid feelings of bodily stench were pretty much wiped away with it being all fairly standard and nothing to worry about, which was the result I was expecting, so I guess that works out ok. No real solutions were suggested for the waking up at all hours and going to the toilet, apart from not drinking past 8pm, which is one of the stupidest ideas I’ve heard for ages, and clearly it wasn’t something Dr Spooner would come up with…I guess he’s one of his underlings, but he opened up stuff on the computer, this Dr Aslam, which I wasn’t expecting him to do. Maybe he shouldn’t have, but a mini breakdown of the extended MRI scan from a few weeks back answered one question….basically, from the scan performed in September to the one in mid October, Clive has grown by about 0.4cm. Apparantly he was only 2cms to start with, so quite the mover, it would seem….

The worktop is again full of medication, there’s still space for the kettle so not all hope is lost just yet. 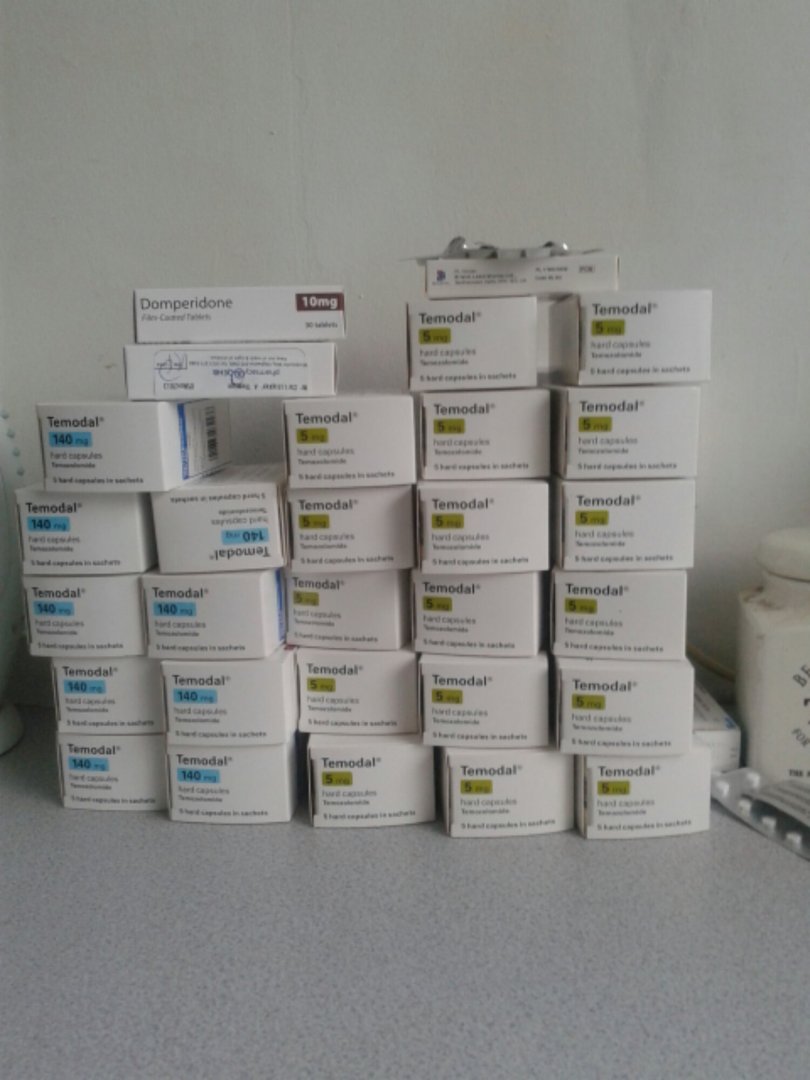 It’s a merry cocktail of anti-sickness ones to combat any possible side effects, some stronger ones for a few days, steroids, the chemo ones and some paracetemol for headaches…yeah, like that’s an issue.

The first real taking up someone on their offer of appointment taking to lessen the burden on the parents is complete! An early (715) trip with Bridget across Brum!

It wasn’t until I got to the MRI scanner that it was mentioned that it was a more in depth, longer one….how long says I…oh, between an hour and hour and a half. It’s a good job she’s a Candy Crush user- I don’t know how she would have coped otherwise!!

Remote dye was done through a cannula, which I think could be my first time, no idea how much was pumped in over the hour-ish, or indeed how long it was exactly, I’d nodded off after a bit, it’s just so damn melodic.

I can only assume that they are using the ‘extra detail’ gained from them to plot more of a course of action- but they will do that in due time; it’s only been a few hours and the mask fun begins in the morning…..